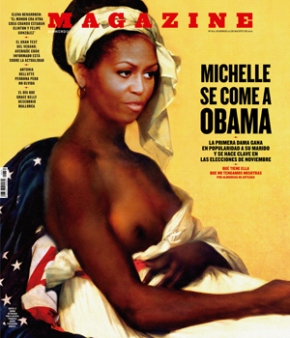 A magazine in Spain, Magazine Fuera de Serie,  has published a photoshopped image of  a partially nude First Lady Michelle Obama. The image shows FLOTUS sitting in a chair, covered with what appears to be an American flag, with one of her breasts exposed. It looks as if the first black First Lady has been remade into a slave wearing a head wrap, thanks to technology.The question which immediately comes to mind is, did anyone ever publish a nude magazine cover of Laura Bush? What about Barbara? Hillary? Of course not, but it seems that, even as First Lady, white people across the globe feel that they can use Michelle Obama’s image for whatever purpose they desire. If they desire to see her naked, then so be it, regardless of whether or not she’s married, or who she’s married to. Married to the leader of the most powerful country in the world? No matter. Show me your titty. And so it goes. In a white supremacist structure, it doesn’t matter how much a black person achieves, he or she is still just an object to be whimsically used and discarded.

In this instance, Michelle Obama’s face was superimposed on the body of an African Guadeloupean female slave painted by French artist Marie-Guilhelmine Benoist in 1800. To you, FLOTUS is a brilliant attorney and an excellent First Lady, but to the folks at Magazine Fuera de Serie, she’s still just a slave. Best not let her, or us, forget that.

To the artist’s credit, she has done other famous nudes, some of them white. But the idea that Michelle Obama’s face would be superimposed on a slave’s body has special meaning, and anyone with half a brain would know that. I’m sure the artist, Karine  Percheron-Daniels, knows that this representation of Obama shows her as submissive and powerless. And that wasn’t by accident. That was the plan.

I am a Graphic artist and lover of computer generated images. Business minded, and also love to have fun. I love the media. MablizzyOfficial is staying updated with info and keeping others updated as well..
View all posts by Aim_LEGEND »