Since news of the October 1 overnight attack on Federal Polytechnic, Mubi in Adamawa State, in Northern Nigeria broke out, the same questions ring out: Who are the men who perpetrated the act? For which reason? What will the government do to secure the lives of Nigerians? And, how soon will these victims and thousands of their family members who have been thrown into endless trauma get justice? END_OF_DOCUMENT_TOKEN_TO_BE_REPLACED

“The Meaning of life is that your deeds outlive you.”
—Kola Boof
Kola Boof is a famous writer and has dated Osama Bin Laden(although claiming she was his sex slave)  and amongst other amorous encounters was Jamal Lewis,Djimon Hounsou.

Read her tweets below on why it is more virtuous to be a mistress than a wife: END_OF_DOCUMENT_TOKEN_TO_BE_REPLACED

Suicide bomber blown to pieces by own bomb

A male suicide bomber was on Tuesday ripped apart by his own explosive device in Bauchi, after travelling by public transport for more than 393 km with the device from Yola, Adamawa State. The bomber, now in critical condition at the Tafawa Balewa University Teaching Hospital, Bauchi, and closely monitored by security agents, travelled in […]

JONATHAN READS THE RIOT ACT, DEPLOYS ARMED FORCES TO 7 NORTHERN STATES As president, this is the speech I would have delivered to the Nation and I would have done so without the help of a written document: Fellow Citizens, at sunset yesterday, I authorized our armed forces to begin full deployment to the seven […]

Lagos has finally been hit by the fear of Boko Haram. After that prank call to AIT in which an individual claiming to be a rep of the dreaded Islamic sect threatened to attack Lagos and Abuja in 72 hours, most malls/big buildings in the state are now more security conscious and are thoroughly searching cars and individuals before allowing them into their premises.

They searched me and my car this afternoon when I entered the Adeniran Ogunsanya shopping mall. First time that will ever happen, and when I asked them why, they said they got intelligence report that BH was planning to bomb a mall in Lagos.

Meanwhile, an anti-bomb squad was invited to Silverbird Galleria this morning to sweep the building.

BinLaden had “direct or indirect” communication with BokoHaram????

Documents found in the house where Osama bin Laden was killed a year ago show a close working relationship between top al-Qaida leaders and Mullah Omar, the overall commander of the Taliban, including frequent discussions of joint operations against Nato forces in Afghanistan, the Afghan government and targets in Pakistan. The communications show a three-way […]

Casualty figures sent according to residents of Kano from the scene of the bomb blast and at the Bayero University shows that no fewer than 15 worshippers at the Catholic campus fellow lost their lives in the attack.

Sadly, one of the sources say the figure may likely rise as some of the injured persons taken to the hospital are in critical conditions. According to an online media, the Commissioner of Police in Kano, Ibrahim Idris, said his team would contact the hospital for an update on the casualty figure.

Also, Engr Abubakar of the Kano State Emergency Management Agency said security personnel at the scene are not helping matters as they are being prevented from doing their job

“The scene has been cordoned off by security agencies and we have been shut out. We are about two kilometres to the scene. Everybody is here, including the Red Cross and other agencies. We have important work to do at the scene, but we are here. We don’t know what to do,” Engr. Abubakar said.

Updates on the simultaneous Bomb blast in Taraba and Adamawa state

Reports reaching us says that the bomb  which exploded in Jalingo Taraba state near the Government house and also a second one in Adamawa state due to an explosive device that was successfully detonated in around Adamawa.  Parts of the finance ministry were affected by the explosion.

The explosion which occurred about 9 a.m. appeared to have been targeted at the convoy of the state’s Commissioner of Police. Ibiang Mbasike, the spokesperson for the Police in Taraba has confirmed the attacks.. 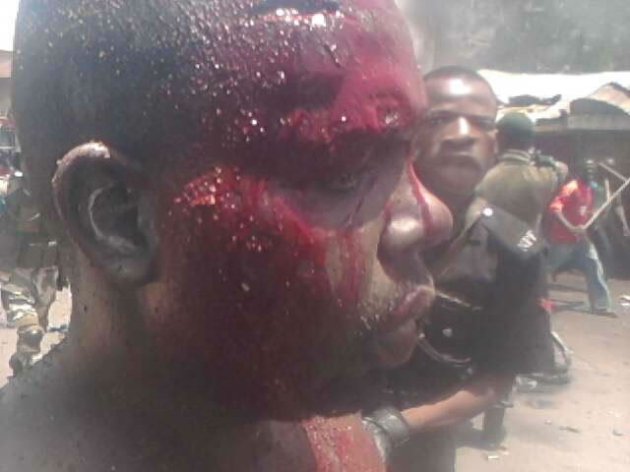 Face Of The Suspected Kaduna Bomber apprehended yesterday. Battered and beaten to a pulp.

Friday April 27, 2012 President Goodluck Jonathan yesterday urged media workers not to be dissuaded from carrying out their fearless campaign for peace, justice and equity as democracy cannot flourish without press freedom. In a statement by his Special Adviser on Media and Publicity, Dr. Reuben Abati, Jonathan condemned the bomb blasts, which occurred early […]

BOKO HARAM: War on the media

Haram •Five killed, many injured as Boko Haram bombs The Sun, THISDAY offices Friday April 27, 2012 Barely one week after the United States warned of possible terror attacks in the country, Boko Haram yesterday hit ThisDay offices in Abuja and Kaduna, killing two securitymen and injuring some staff. The Sun office in Kaduna was […]

A suicide bomber drove into the premises of ThisDay Newspaper in Jabi, Abuja this morning. No further details at this moment…story developing…