The Don’t Judge Me singer was dragged into the bitter row with the 30-year-old TV star when he sent a tweet about how old he looks for his age.

Jenny then replied: “I know! Being a worthless piece of s**t can really age a person. RT.”

END_OF_DOCUMENT_TOKEN_TO_BE_REPLACED

Feud … Rihanna, left, and Rita Ora
RIHANNA will be furious when she finds out RITA ORA has bagged a film role she had been earmarked for.

The Bajan — whose new album Unapologetic went straight to No 1 this week — had been lined up to play the villain in upcoming blockbuster The Fast And The Furious 6.

But now it’ll be Rita in the limelight in supercars, alongside VIN DIESEL and DWAYNE “THE ROCK” JOHNSON.

END_OF_DOCUMENT_TOKEN_TO_BE_REPLACED

Just yesterday another lady copied a female movie star’s tat, why do our ladies have low self esteem?

TATTOO mad Rihanna has revealed she begged an artist to ink her face — but he refused.

The 24-year-old SOS singer already has at least 14 etchings on her body, including a gun under her armpit, the Egyptian goddess Isis between her boobs, a Sanskrit prayer on her hip and “Thug Life” across her knuckles.

But when it came to one on her face, she revealed: “The tattoo artist said, ‘Nope, I’m not gonna do it, because if you’re looking at your face, it’s right there staring at you’.” END_OF_DOCUMENT_TOKEN_TO_BE_REPLACED

Tags: Gq, magazine, Only Girl (in the world) to appear in GQ's Men Of The Year list GQ, Rihanna 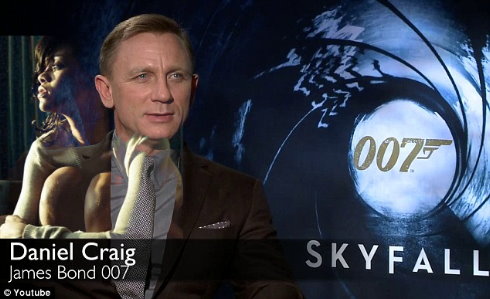 He recruited both the director Sam Mendes and villain Javier Bardem to join him in the latest 007 installment, Skyfall.

And now Daniel Craig has revealed his top pick for the next Bond girl.

While being interviewed on Globalgrind.com the British star revealed he can see singer Rihanna playing the MI6 agent’s love interest.

END_OF_DOCUMENT_TOKEN_TO_BE_REPLACED

Veil of a time … Rihanna
RIHANNA looks a bit of all fright – posing topless in a snap she shared with fans the morning after her Halloween bash.

The singer, 24, covers her charms with her arms as she sits up in bed wearing a green veil and tiara.

Her underboob tattoo – which she had made in London in memory of her late gran – is partly revealed in the shot.

Ri-Ri posted the snap on Instagram, with the caption: “The morning after! Hello November.”

The FULL RIHANNA VOGUE Spread And She’s PRETTIER And More PHOTOGENIC Than Any SUPERMODELS!

The pop goddess takes to nature with a few fierce poses and sexy looks in the gorgeous and simply flawless photoshoot, shot by world-renown photographer Annie Leibovitz. It’s the second time the pair has teamed up for an American Vogue cover, with the first Little Mermaid-inspired cover being for the April 2011 issue of the mag.

As for her VOGUE interview, RiRi covers the essentials: she squashes rumors, gushes about her friendship with Katy Perry, talks about her renewed friendship and working relationship with Chris Brown, and laments her dating drought. See more exclusive pictures of RIH…

END_OF_DOCUMENT_TOKEN_TO_BE_REPLACED

Rihanna is going all out on her seventh consecutive album, titled ‘Unapologetic.‘

The 24-year-old revealed the album title and cover (on which she appears topless) on Thursday, October 11, 2012, on her Instargram Page. ‘Ok I’m officially hype for my album cover!! I might just leak it early #sideeffects‘, Riri teased her fans before dropping it.

Rihanna’s dad: I love Chris, I’m happy if my daughter gets back with him

With dad … Rihanna and Ronald Rex
RIHANNA’S dad appears to have given his backing for the star to get back with violent ex Chris Brown – saying: “I love him – he’s always had so much respect for me.”

The singer’s estranged dad Ronald Fenty is said to have told pals Brown should be forgiven for beating up his daughter. END_OF_DOCUMENT_TOKEN_TO_BE_REPLACED

[Video] Love Triangle!!! Is there such thing as loving two people? – Chris Brown

The R&B singer, 23, has followed up with a video in which he claims he loves ‘two women at the same time’.

In the video, he says: ‘I’m stressed out… when you share history with somebody, then you tend to fall in love with somebody else, it’s kinda difficult.

‘Is there such thing as loving two people? I don’t know if that’s possible, but for me, I feel like that.’

Karrueche is reportedly brushing off his attempts to reconcile.

A source tells RadarOnline: ‘She is just too hurt to even go there at this point. Karrueche just wants a break from all of this drama, and she knows that Chris wants whatever he can’t have.

Its Official!! Chris Brown and Rih are back banging 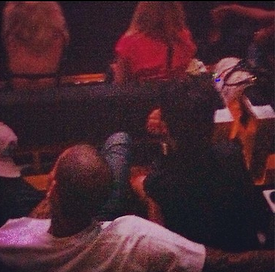 It’s official. Chris Brown and Karrueche Tran are done and Chris Brown and Rihanna are back on. The ex couple went to Jay Z ‘s concert at the new Barclays Center together last night (pictured above).Now check out Karrueche & Chris Brown’s Tweets to know it’s wrap for them. Guess Rihanna finally won!

More Tweets as you continue…. END_OF_DOCUMENT_TOKEN_TO_BE_REPLACED

Its seems like its ‘sextape galore’ after Kanye then this
–There’s a rumor spreading like crazy, that a Rihanna Sex Tape was leaked by a group named L3aKwArE !
We’ve been reading the Rihanna sex tape rumors for months, and it looks like the reported tape may exist after all!
The video is supposed to have a length of about 15 minutes and is showing Rihanna having sex with an unknown man.

Is it real?! The group claims it is authentic and they are in the final phase of putting it online. Once we have the link, we will let you know

Now Chris And Rihanna Got Matching GOLD TEETH after Tatoos

Chris Brown and Rihanna have one of those CONNECTIONS that can never be broken. One day after revealing Chris Brown’s Rihanna-like tat (which he CLAIMS is not her) – Rih steps out wearing a GRILL.

Interestingly they look EXACTLY like the ones that Chris Brown recently got. We’re sure that’s just ANOTHER coincidence . . . SMH . . .

Chris Brown has unveiled a new tattoo on his neck of what appears to be a woman’s battered and bruised face.

The 23-year-old singer put the ink on display during an event in Las Vegas earlier this month.

The face structure, arched eyebrows and plump lips certainly bear a resemblance Rihanna, and the design has eerie echoes of the shocking picture that emerged of the We Found Love singer after he brutally assaulted her in 2009. END_OF_DOCUMENT_TOKEN_TO_BE_REPLACED

Rihanna has paid tribute to her late grandmother with a tattoo alluding to her as a goddess.

The Russian Roulette singer, who performed at the closing ceremony of the London Paralympics tonight, posted a revealing snapshot on Instagram of the etching on her chest between her breasts.

Holding her arm across her bare cleavage for modesty, a large image of the Egyptian goddess Isis can be seen, kneeling with her wings spread and spanning across Rihanna’s ribcage.

Alongside the picture, Rihanna tweeted: ‘Goddess Isis – Complete Woman – Model for future generations – #GRANGRANDOLLY – always in and on my heart.’

END_OF_DOCUMENT_TOKEN_TO_BE_REPLACED

They’re the shots the world has waited for – and three years later, they’ve finally manifested. Chris Brown and Rihanna…together!

The pair’s stunning public embrace took place at tonight’s MTV Video Music Awards following Brown’s win for Best Male Video. It marks the first time the former couple have been seen together since the infamous “incident” in 2009.

Peep more shots below…and be sure to keep it locked on That Grape Juice for up-to-the-second VMA 2012 coverage!

what do you think?

Rih entered into a public war of words with comedian Joan Rivers over her declaration of love for violent ex Chris Brown. Responding to the interview, outspoken Joan Rivers tweeted a joke about domestic violence, which has been blasted by users of the social networking site. END_OF_DOCUMENT_TOKEN_TO_BE_REPLACED

(PHOTOS) ITS ON!! (DRAKE)DRIZZY AND HIS HENCHMEN PREPARE FOR WAR

(PHOTOS) ITS ON!! (DRAKE)DRIZZY AND HIS HENCHMEN PREPARE FOR WAR